In My Next Life I’m Going To Be Gay

Last October I went to see Dan in New York. I stayed in his loft apartment and slid into his life for a week: gallery openings, dinners with fashion designers, lunches with TV producers followed by a weekend at The Hamptons. We stayed in an interior designer’s house, the marble had been shipped from India, the wood paneling from an old library in London. How much better was it than my  cramped mice infested London flat. Did I mention all of these people were men? Did I mention they were gay?

It was only when I was swimming laps in their pool that I finally came to terms with the fact that I couldn’t have a baby. Ten years ago, I’d been told by my doctor I had a 1% chance. I was distraught at the time but these men didn’t have kids and look at their lives. They were as close to heaven on earth as possible.  This would be impossible if they had kids. Kids stole your sleep, spent your money, snatched your freedom and generally created chaos wherever they went. 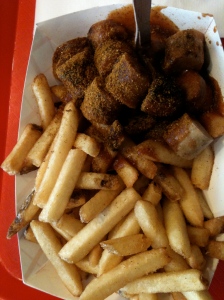 Before I left, Yan lei told me I had to run 5k everyday. In London, I’d been training with him six days a week. I’d run four miles to his gym, do twenty, three minute rounds followed by half an hour of Qigong. So a 5k run was a walk in the park but I was struggling to do this. In the private gym of the New York apartment with only a security camera for company, I closed my eyes for a second –  chips and German sausages flew before them.

It was only when I got back to London that I discovered why I was dreaming of German sausage. The training coupled with the strict diet I’d been on must have triggered something in my body and I ‘d achieved the 1%.

I’d been training hard to become Lena Jones, a singer – like myself  -who loses her record deal and ends up living in a kung fu school – oh, I did that too -.  It was hard to write a film so close to real life.  Things that were important to me were not important to the story or Lena and it took awhile for me to differentiate between the two. Each draft went through an acid test of script editors and  screenwriters until finally I achieved a draft where the only feedback that came back was positive.

Today I start training to become Lena Jones all over again , write her soundtrack, raise money for the film, do battle with mice and look after a cute little baby. There’s a 20% chance of a film actually making money but as I’ve already achieved the 1% that’s pretty good odds for me.

If you’d like to help us make this film, please click here to watch the trailer and pre-buy the soundtrack or the film.

And if you have any tips on how to get rid of mice, please let me know.

Feist getting intimate with Air in Snow Patrol's bedroom. Previously known as Nut, she recorded the album for Sony. Described at the time as a “little known masterpiece", it was championed by DJ's Phil Jupitus, Mark Radcliffe and Jo Whiley Her unique blend of acoustic guitars, seductive pop and vintage electronics is certain to appeal to fans of the likes of Florence and the Machine, Sia and Emiliana Torrini. Co-produced by Andy Ramsay (Stereolab) Kata has created an album which she describes as sounding like Ted Hughes and Sylvia Plath before the inception of the Birthday Letters. "Breaking Up With You Is The Best Thing That Ever Happened To Me" is out now on bandcamp.
View all posts by katamusic →
This entry was posted in Uncategorized and tagged babies, crowd funding, german sausage, i can't have a baby, indiegogo, kung fu, music, nut, pregnancy cravings, screenwriter journey, shifu yan lei. cat goscovitch, the turtle and the sea. Bookmark the permalink.